Since our humble beginning in December, 2000, Tzaneen Country Lodge is still growing from strength to strength, gaining awards and accolades in our quest to exceed the expectations of our guests.

"What we did the best though, is that we started as "Green". We started the green revolution in our midst, by practising responsible tourism before it became vogue. Unbeknownst to our popular peers we are committed to eco conservation and sustainable practices not because it is fashionable or trendy but because our ethos and founding statement is imbedded within our environmental commitment," said Adri Kruger, owner of Tzaneen Country Lodge.

Tzaneen Country Lodge won its first award from the AA (Automobile Association of South Africa) in 2003 and was awarded the top prize as the best Country Commercial Hotel in South Africa. Since that first award we have received the following accolades

Since that first award we have received the following accolades:

Certificate from Tzaneen Municipality for service to Tzaneen

Rooms for Africa Certificate of Excellence

Check Availability
We are focused on our guests

Here's what they say about us

Second time we stayed in this hotel
First picture shows the view from the gallery to the inside garden. This garden contains the swimming pool where you can relax around the pool. The gallery itself has comfortable chairs and everything looks clean and well maintained

Magical!
If you are travelling to Tzaneen, Tzaneen Country Lodge should be your first point of contact. I spent 5 nights at the lodge and it was difficult to leave, I must say. From the check in to check out, the service was outstanding. The establishment is well maintained from the grounds to everything. Vegetation has been kept, you literally feel like you are in the 'Garden of Eden' there. The room I got (61) was spacious, with DSTV (hospitality channels), with shower, bath and a jacuzzi! Tzaneen is a hot place and I dont know how many swimming pools this establishment has! You can tell that everything was planned around the guest's convenience in mind. Free WIFI throughout the lodge - thats amazing! Food was amazing and service from management and staff, top notch. I highly recommend. The conference venue - state-of-the-art! Thank you very much guys. I wouldn't mind coming back any day! Keep up the good work.

Our second home
Beautiful everything including the animal farm. My son kept saying it's his daddies house and always asks when are we going back to Tzaneen. We had a wonderful family outing and hospitable staff. Thanks and see you soon.

Best country Inn in Zululand
Exceptional little hotel, friendly staff and great food.. facilities far better than most hotel chains., children enjoyed the pools and the river front access. Only issue was a noisy fridge in the room that we switched off. 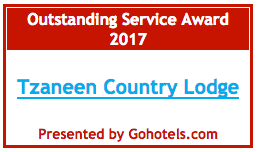